Analyst with a good understanding of people

INTERVIEW WITH LUTZ FASSBENDER, CHAIRMAN OF THE WORKS COUNCIL AT GIRA LAST UPDATED: 2012 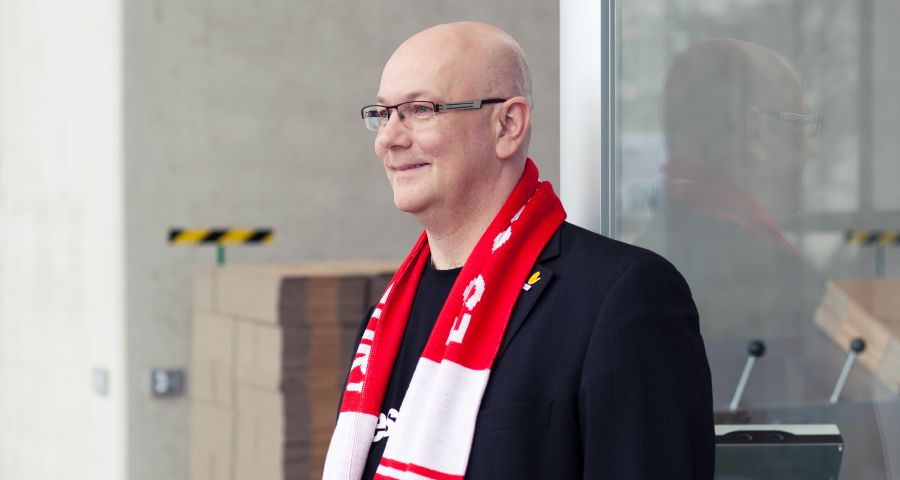 Lutz Fassbender likes to get to the bottom of things: At Gira he completed three extensive training courses in order to better fulfil his role as chairman of the works council. Today, he analyses and resolves conflicts among staff using professional techniques and also advises executives on topics such as organisation and labour law. A discussion about the work of the works council, which keeps both sides in mind and which prefers negotiation to confrontation.

Mr Fassbender, you are chairman of the works council at Gira. Normally, this is not a position for making yourself popular with management. Nevertheless, the company has allowed you to take three cost-intensive training courses. How did you manage that?

LF: I think this has to do with the manner in which I carry out the work of the works council. Management and HR management have perhaps noticed that a works council that is able to have a unifying effect is also an advantage for the whole company.

How has your further training helped you here?

LF: In the mediator training, I specialised in organisation and business mediation as well as conflict consulting. This provided me with motivation, questioning and addressing techniques, which offer the conflict parties the chance to come up with their own solution with moderation. For me, this is actually the main task of the works council. From the mediator work came the idea of completing coaching training, as this deals among other things with team development. And organisational psychology examines how people behave in their everyday working life and how they perceive and experience relationships.

You said that a works council which is able to have a unifying effect is also an advantage for the whole company. In what way precisely?

LF: With many conflicts, the works council offers a good buffer between corporate management and the workforce. Many disputes result from personal circumstances, from one's private life and don't actually belong in the company. As member of the works council, I have the opportunity to either listen to the complaints and then go to management with a big club. Or I take the opportunity to help to resolve conflicts before they arise. And if that is not possible, I at least show my colleagues: We are actually on a completely different level.

Which conflicts do you have to deal with?

LF: For example, if the person tends very heavily to look for the question of guilt. Here, it is more exciting, however, not to look for the cause but rather come up with a solution.

Isn't that unsatisfactory for your colleagues? People want justice and this also involves being allowed to explain why they see themselves as being right.

LF: The things that lead to conflicts are usually not linear. It's not a case of cause equals effect, but I have an effect where the reasons lie elsewhere. But there's no point worrying about it in this complex system. It might just simply be that you got up one morning and had a row with your wife. Then you come to work and something else happens. How should anyone in the company know that you had a problem at home. Realistically, it turns out in many cases that the problems lie elsewhere.

Can the benefit of your further training for Gira be measured in some way?

LF: Difficult, there are "soft" factors which cannot necessarily be measured. But let me give an example: In one case, two colleagues were so much at loggerheads that management almost wanted to let one of them go. In the plastics processing division, familiarization periods are sometimes quite lengthy and accordingly expensive for the company. Then I made the suggestion to conduct a mediation. This happened a few years ago, both employees still work for the company and they get on very well. If one of them had been dismissed, Gira would have had to reckon with costs for recruitment and training.

More on further training at Gira 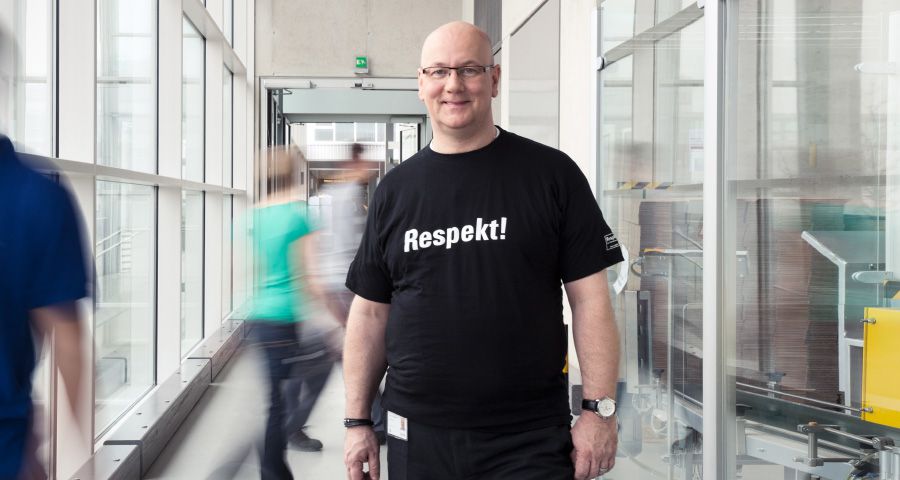 IG Metall is committed to the initiative "Respect! No place for racism", Lutz Fassbender believes the T shirt also fits well with Gira's philosophy: "The topic of respect, i.e. not talking badly about others and remaining objective when criticising, is an integral component of Gira's corporate culture."

Does your daily work mainly consist in resolving conflicts then?

LF: As a member of the works council, I conduct many discussions all the way up to extensive consultations. This also includes executives who want to implement something, but are unsure, for example, to what extent they come into conflict with labour law. I am also a member of various working groups, e.g. on demographic change or on the topic of work-life balance, and externally, as a member of IG Metall, I am the link to the trade union.

In your function as member of the works council: What is your attitude towards the company?

LF: I am one of the members of the works council, all of whom have of course undertaken to work with the company in a spirit of trust, while keeping an eye on its interests. Because jobs are only secure if the company is doing well and good practices are in place. And I believe I am right in this. When I started here, there were only 600 employees, today there are over 1,000.

The company seems to be doing well.

LF: Yes. But works councils and their members can also do a lot of damage. After all, it's a position of power. Many people don't know how much power a works council can actually have. But I don't like power games. Power is a good thing, but it has to be used in a positive way.

The relationship between the works council and Gira seems to be quite amicable. Is that not unusual? The media usually report on cases that are totally different.

LF: If you look at the press coverage, you will of course always get the negative cases. But large successful companies such as Gira often have moderate and yet clearly positioned works councils. They know what they want, but are not necessarily seeking confrontation but rather negotiation. That is even a locational advantage for Germany.

What do you mean?

LF: Co-determination in Germany may have a positive influence on corporate decisions. If decisions are always made from management level, i.e. from a certain distance, this may ruin the whole system. This means productivity at rock bottom, dissatisfied employees and high levels of employee turnover and sickness. Reciprocity counts when there is reasonable co-operation between the works council and management, as is the case at Gira. In this case, a member of the works council is taken just as seriously as a manager. You weigh the advantages and disadvantages against each other and take the best decision for the company.

How do you perceive Gira as an employer in your special position?

LF: Gira is still what I consider to be a family company. You see Mr Giersiepen all around the company, he is interested in people. He says the doors are always open, and that's true. Of course he expects the hierarchies within the task responsibility to be observed, but also this is not important when it comes down to just talking to each other.

There is always this statement about the hidden champions, which says that it is actually more attractive to work for a small or medium-sized company, especially for graduates straight out of university.

LF: You can definitely climb on the career ladder faster at a large corporation, but you can mess up much quicker, too. A family company offers the advantage of a high level of continuity and sustainability. My corporate planning is, just like at Gira, mostly on the basis of four, five years. But, on the other hand, when I look at the stock corporations: They have to report quarterly figures. Management has a problem if they are not right.

Born
1966
At Gira since
1993
Training
as master electrician (Chamber of Crafts)
Career at Gira
Lutz Fassbender worked as a consultant in technical sales until 1999 and then moved to information systems for workplace systems until 2009. In 2001, Lutz Fassbender was elected to the works council and has been a full-time chairman of the works council at Gira since 2009.
Current further training measure
Since 2011 Lutz Fassbender has been undergoing further training as a systemic coach in accordance with DBVC standard. In his free time, he is also currently engaged in a course of academic studies in social sciences at the Open University of Hagen.

Gira uses cookies for websites in the gira.de domain. By using our website, you agree to the use of cookies. Our Data Protection Declaration contains more information about the cookies used by us or third parties and the ways in which you can deactivate cookies.